The new Pandemic is actually an Epidemic 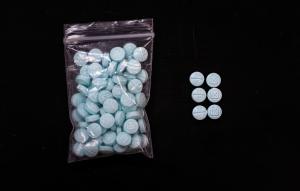 On Wednesday, September 9, 2022, Wakulla county sheriff’s deputies arrested two people in an ongoing effort to combat fentanyl deaths in Florida.  Deputies along with agents from The North Star Task Force served a warrant at 799 Rehwinkel Road which led to the arrest of 36-year-old, Candace Ashley Mermer, and 27-year-old Curtis Ray Woodward. Woodward was arrested and booked into the Wakulla County Jail on the following charges:

Ashley Mermer  was charged with:

The arrest was carried out by the Wakulla County Sheriff’s Department and The North Star Task Force which was started by Wakulla County Sheriff Jared Miller, since its inception 9 other counties have joined including Calhoun County, Dixie County, Gadsden County, Gulf County, Jefferson County, Lafayette County, Leon County, Liberty County, and Taylor County. Sheriff Jared Miller was quoted as saying,

“We have transitioned from the massive area search to an intelligence-based search, the Wakulla County Sheriff’s Office along with many assisting agencies continue to follow every lead and tip that comes in aggressively.”

The Drug Enforcement Administration issued a Public Safety Alert warning Americans of the alarming increase in the lethality and availability of fake prescription pills containing fentanyl and methamphetamine. DEA’s Public Safety Alert, the first in six years, seeks to raise public awareness of a significant nationwide surge in counterfeit pills that are mass-produced by criminal drug networks in labs, deceptively marketed as legitimate prescription pills, and are killing unsuspecting Americans at an unprecedented rate.

Recently in Gadsden County Florida, 19 people overdosed on fentanyl-laced drugs, 9 of whom died.  No arrests have been made yet.

Fentanyl and other synthetic opioids are the most common drugs involved in overdose deaths. Even in small doses, it can be deadly. Over 150 people die every day from overdoses related to synthetic opioids like fentanyl. Drugs may contain deadly levels of fentanyl, and you wouldn’t be able to see it, taste it, or smell it. It is nearly impossible to tell if drugs have been laced with fentanyl unless you test your drugs with fentanyl test strips. Test strips are inexpensive and typically give results within 5 minutes, which can be the difference between life or death. Even if the test is negative, take caution as test strips might not detect more potent fentanyl-like drugs, like carfentanil.

The origin of most of the illegal fentanyl in the United States is China. The fentanyl is then moved across the Mexico/United States border by Mexican cartels and then distributed using drug corridors set in place by the cartels.  Mexican Cartels, specifically the Jalisco New Generation Cartel (CJNG), the Gulf Cartel, and the Beltran-Leyva Organization (BLO) target counties with low populations and small Law Enforcement agencies. The local Law Enforcement agencies have few officers and very few resources to combat this problem. The cartels smuggle these drugs through these small counties and distribute them across America.

On July 18, 2022, Florida Attorney General, Ashley Moody sent a letter to President Joe Biden requesting that he classify fentanyl as a WMD (weapon of mass destruction) which would allow more federal agencies to respond to the problem.