A Fight for the Republic 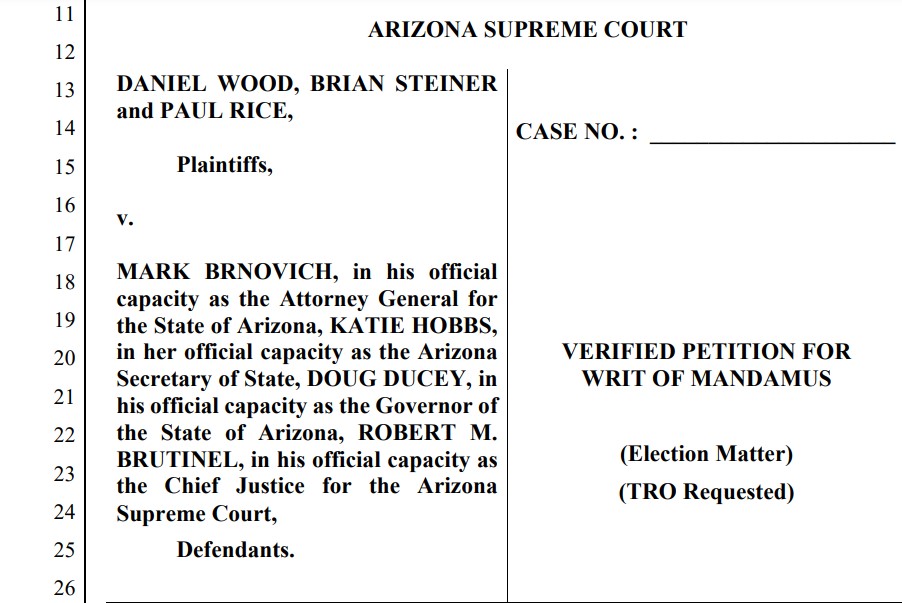 Yesterday, in Maricopa County, Arizona, a Temporary Restraining Order and a Writ of Mandamus were both filed by a group of American patriots who are trying extremely hard to get their evidence acknowledged by the courts. Every motion filed with the courts thus far has been rejected due to jurisdictional reasons and yet, according to Arizona law, if someone files a special Writ, then the courts are supposed to transfer it to the proper jurisdiction. As of this time they have failed to do so.

The State of Arizona has ordered that all voting ballots be destroyed as of 1159 pm on September 3, 2022, in accordance with Federal law. Postponing the date of destruction would not pose any harm to said plantiffs or anyone else since the ballots are a crucial part of evidence in their continued efforts to litigate their case.

These brave patriots are desperately trying to preserve the evidence they need in order to prove that the Presidential elections in 2020 were managed in a way that is illegal and against the rules set up by the State of Arizona.

The TRO was filed by these patriots to halt the September 3rd destruction of the ballots. The writ was filed because the plaintiffs contend that the voting machines used in the 2020 election were not certified in a legal way thus invalidating their results, and that if the machines prove to have not been certified according to Arizona state law, then the Secretary of State, Governor, Attorney General, and Chief Justice must decertify Arizona’s 2020 Presidential election, recall Arizona’s Joseph Robinette Biden, Jr.’s Electors, remove Maricopa county votes from the 2020 presidential election results as they were/are void, order Maricopa county to re’run the election, by way of special election by paper ballot only.

“WHEREFORE, premises considered, the Plaintiffs pray as follows:
1. That good and adequate service be had on all Defendants;
2. That this Court issue a peremptory Writ of Mandamus compelling the
Arizona Secretary of State, Governor, Attorney General and Chief Justice to decertify
Arizona’s 2020 presidential election, recall Arizona’s Joseph Robinette Biden, Jr.’s
presidential electors, remove the Maricopa County votes from the 2020 presidential
election results as they were/are void ab initio, order Maricopa County to rerun the
Arizona 2020 presidential election, in accordance with the law, as soon as possible, by
way of a special election, with paper ballots only, on a single election day, omitting
Zuckerboxes and “no excuse” absentee mail-in ballots, with the paper ballots being
counted by hand, with multiple members of all political parties present to observe, with
unobstructed 24/7 public livestream cameras of all vote counting so that Arizona can
restore voter confidence and Arizona’s commitment to free and fair elections, with the
Defendants then adding Maricopa County’s presidential election votes to the
remaining votes and ordering the Defendants to then certify a lawful 2020 presidential
election; and
3. Such other relief to which the Plaintiffs may show themselves to be
entitled.
Respectfully submitted this 31st day of August, 2022.”

It is the sworn duty of our elected officals and the legislator to conduct properly executed and legally certified elections.